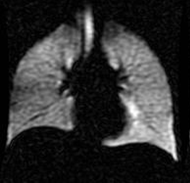 The nuclei of noble gases possessing non-zero nuclear spin may be optically hyperpolarized to a degree several orders of magnitude above that corresponding to a thermal equilibrium distribution. The otherwise inert noble gas becomes extraordinarily sensitive to magnetic-resonance detection. The technique, known as spin-exchange optical pumping (SEOP) [1], involves an alkali-metal intermediary, which absorbs angular momentum from circularly polarized light and transfers it via interatomic collisions to the noble- gas nuclei. We partner with a company in Durham, North Carolina (Polarean, Inc) seeking to commercialize a device that produces large quantities of hyperpolarized 129Xe gas for magnetic resonance imaging (MRI) of human lungs. Because of low inherent gas density, such imaging would not be possible without the enhanced signal from the hyperpolarized gas. We work on the physics side of SEOP, the model for which still has several poorly understood aspects. In one NSF-funded project, one of three aims is to determine the best alkali-metal partner (rubidium vs. cesium) for 129Xe by determining the spin-exchange efficiency in each case. We have developed an extremely sensitive optically detected EPR technique that uses the alkali-metal atoms as an embedded magnetometer to sense the magnetic fields produced by the evolving nuclear polarization [2]. The results of our work will directly impact Polarean’s business activities, particularly if cesium proves to be the superior alkali-metal partner. (Diode-laser technology has, until recently, favored the use of rubidium because of the materials and wavelengths involved.)

The REU scholar will work with the faculty mentor and a graduate student to both further develop optically detected EPR and to employ it to perform sensitive measurements of spin-exchange and spin-destruction rates in the Rb-129Xe and Cs-129Xe systems. The experiments involve fabrication of glass vapor cells containing the alkali-metal and noble gas, custom-built electronics, and LabView programming, in addition to actual data-taking and analysis. The REU scholar will be directly engaged (with appropriate oversight) in all these activities.

Brian Saam was a faculty member at the University of Utah for 17 years before moving to Washington State University in 2017 to chair the department. He has a long track record of involving undergraduates in his research, including 12 students while at Utah, five of whom were women. Of the women mentored, one is now a physician, one received her Ph.D. in medical physics at UCLA and now works for a small medical-device company in Seattle, one is currently pursuing a Ph.D. in electrical engineering at Stanford, and one earned an advanced bioengineering degree in Germany. Another (male) student is currently a faculty member in physics at the University of Minnesota, Morris. Prof. Saam has mentored three undergraduates at WSU (one woman), two of whom are entering graduate school this fall (Cornell and Rochester Institute of Technology) and one who works in the group currently. There are five publications [3-7] co-authored by four different undergraduates; one of these had a (female) undergraduate as first author [5]. At WSU, two papers are currently in preparation, both will have undergraduates among the co-authors.