Looking for resources as a current or prospective undergraduate student attending Washington State University’s spectacular Physics and Astronomy Program? Here you can find links to the application process, courses, scholarships, student directory, extracurricular activities, and the undergraduate student handbook. Not enough info? Please e-mail the department at physics@wsu.edu or call at 509-335-9532. 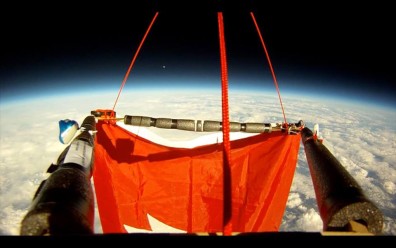 The Washington State University flag has flown in many places around the world – from ESPN Game Day to the Great Wall of China – and now more than 18 miles into the stratosphere. A Cougar flag attached to a weather balloon launched from the center of the Pullman campus reached nearly 100,000 feet, presumed to be a record-breaker for the WSU banner. The flight was part of a WSU Physics and Astronomy Club student project. Watch the video