Faculty Mentor:  Mark Kuzyk’ s research spans basic physics to device demonstration where light is used to characterize materials or manipulate them; and materials are used to generate light or control it.  Examples of work include:

Photomechanical Effects, which are those where light changes the mechanical properties of a material, such as its shape or stiffness.  Applications of this research include light-driven motors, sensors, and optical logic.  To explore more about this topic, check out https://doi.org/10.1364/AOP.387366 and https://nlosource.com/OverviewofPhotomechanics.html

Self-Healing Materials heal after being damaged by burning them with bright light.  Our lab discovered that lasing materials made with dye-doped polymers heal when left to rest in the dark.  Experimental studies suggest that healing is en hanced when molecules interact with each other.  Self-healing impacts applications in which the device fails because the material burns out.  The top panel shows a polymer fiber (green due to the excitation light) which is doped with the dye shown in the inset.  The emitted red light is seen on the screen to the left and propagating in a fiber to the right, which is connected to the lasing fiber.  The middle panel shows the decay in light intensity over two runs, where the fiber rests in the dark between runs.  The bottom panel shows another material, as measured with two photon fluorescence during photodegradation, followed by healing, when the light exposes the sample less frequently to allow the material to heal.  To explore more, check out https://doi.org/10.1364/OPN.18.12.000031

Nonlinear Optical Materials are those that control the properties of light that pass through them, and find many applications including optical transistors, which allow one beam of light to control the flow of another one – the basis for optical computers.  One major effort in our group is to identify what makes a material have a large nonlinearity by using fundamental quantum principles to set upper bounds of what is possible.  This contrasts with the common shotgun approach of making many molecules, measuring their nonlinear response, then trying to identify what features give the largest response.  In our approach, we

start with an arbitrary structure, then vary it in a way that obeys the restrictions imposed by quantum mechanics along a path to ever large nonlinearity until it converges to the largest value.  We then use the structure that has the largest value as a guide to synthetic chemists to make molecules that lead to the limit.  The Figure on the right shows an example of how the quantum system’s various parameters evolve as a function of iteration number.  The magenta-colored points in panel (a) show how the nonlinearity converges to its optimum value.  To explore more, see https://doi.org/10.1016/j.physrep.2013.04.002. 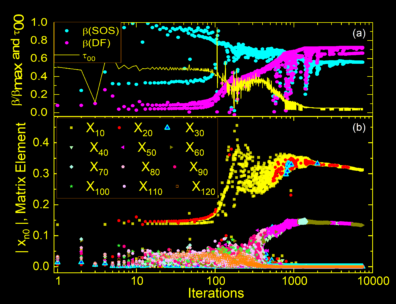 Color-Entanglement of Photons provides a state that can be used for quantum computing, quantum information and increasing the accuracy in metrology.  This is new work in our laboratory aimed at producing novel states of light that may have advantages over other methods due to the simplicity of producing such states and their resistance to decoherence.

All these areas provide opportunities to learn how to make and process materials, to build experiments and interface them to computers, analyze data, develop models that describe the observed behavior and propose theories that give a broad understanding of the phenomena.  Questions that we try to answer pertain to the microscopic mechanisms underpinning the observed phenomena, using this understanding to develop better materials, and using these materials for novel device demonstrations that enable new technologies.