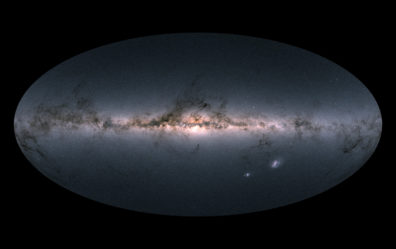 Seemingly simple questions about how stars evolve and how the Milky Way galaxy operates remain elusive. For example, we have a good theory of stellar evolution, but a poor understanding many of the details about the later stages of a star’s life. Part of the problem is that modeling the mass flow out of a red giant star is difficult (e.g. https://doi.org/10.1093/mnras/sty2560 ). We need guidance from observed populations of red giants to gauge if our theory is “tuned” correctly or if it needs more adjustment. The data required for clarity is conceptually simple: we need to know the numbers of stars present in each (late) phase of stellar evolution.

Similar star-counting data can solve some questions about the ongoing ecology of the Milky Way galaxy. The Milky Way turns gas clouds into stars at a roughly constant rate. But stars condense, not one by one, but in groups called clusters. Loose clusters disperse over time, while clusters that are more tightly bound together with gravity survive longer as units. The locations and orbits of both dispersed and not-yet-dispersed star clusters can (given excellent data) be traced back to Milky Way features such as spiral arms, and large molecular gas cloud complexes.

Both of these science thrusts can be address with GAIA (https://doi.org/10.1051/0004-6361/201833955 and attached image of the catalog data) mission data. This space telescope maps over a billion stars with exquisite accuracy. For most of those billion stars, their distances, velocities, brightnesses, and evolutionary state can be found, in this case by undergraduate researchers. This catalog is public and should be at its third data release by the time the undergraduate researchers work with it. At the preference of each researcher, they could

+ discover clusters that have ongoing member loss, and incipient “streams”

Along the way, the researchers will learn basic python programming and visualization techniques in six-dimensional position-velocity space.

Guy Worthey is an associate professor and astrophysicist. He directs the campus planetarium and observatory, and directed WSU’s past involvement as a Project ASTRO teacher training site. At the department level, he has served on the undergraduate studies committee and sponsored the undergraduate physics and astronomy club. In terms of undergraduate research, he mentors an average of three senior thesis research projects per year. This ongoing effort frequently results in published articles.

Worthey’s student Trevor Foote won the 2019 College of Arts and Sciences outstanding senior award, for which the research project is of prime importance. Trevor’s project was entitled “Maximum Luminosity of Type Ia Supernova as a Function of Distance from Host Galaxy.” Mr. Foote, along with most of the students Worthey has mentored, went on to graduate school.