My research focuses on the dynamics of hot nuclear matter in strongly curved spacetime.  Most of my published work concerns black hole-neutron star binary mergers, which are potentially important sources of gravitational waves, kilonovae, short duration gamma ray bursts (GRBs), and r-process elements.  Much of our black hole-neutron star work has been devoted to exploring the large parameter space of possible binaries.  There are two interesting (from a fluid dynamics/GRB perspective) regions of this space, where the neutron star is ripped apart before being swallowed by the black hole:  systems with low black hole mass and systems with high black hole spin.  We’ve focused a lot on binaries with high-spin, moderate-to-high mass  black holes both because they’ve gotten less attention from other groups and because SpEC is very good at handling high-spin black holes.

A black hole-neutron star simulation must adequately model the inspiral of the binary, its merger, outflows of ejected matter into interstellar space, and the accretion disk formed by the merger of hot nuclear matter swirling around the black hole.  Lately, my interest has mostly been on the last two issues.   With regard to outflows, the goal of our work is to track ejected matter far from the merger site to predict electromagnetic signals and final elemental abundances.  For accretion disks, we are studying the effects of magnetic fields and neutrino emission and applying simulations to test gamma ray burst models and to characterize the neutrino radiation.

I’m also very interested in the extension of SXS research to studies of binary neutron stars, newborn neutron stars, black hole accretion in general, and other strong-gravity nuclear matter systems that involve the sort of physics we’ve been playing with in our black hole-neutron star mergers.  To me, the fascination of non-vacuum numerical relativity is that 1) all of these other exotic areas of physics come into play in addition to strong gravity, 2) simulations are still so immature that major pieces of physics have yet to be included and qualitative surprises may be in store, and 3) the existence of a special frame picked out by the fluid flow makes it much easier to convert simulation data into intelligible narratives.

If you are interested in this type of research, I encourage you to learn more by visiting my research web page here, and especially see my letter for interested students, which gives lots of interesting information on black holes, binary neutron stars, and turbulence modeling.

I got my PhD in 2005 at the University of Illinois at Urbana-Champaign working with Prof. Stuart Shapiro on the effects of viscous and magnetic angular momentum transport on binary neutron star merger remnants.  I then went to Cornell as a postdoc working under Prof. Saul Teukolsky.  My main task during these years was to add hydrodynamics to the Spectral Einstein Code and carry out our first black hole-neutron star simulations.  I next began working on adding more realistic modeling of the neutron star matter to these simulations.  In 2010, I joined the faculty of Washington State University as an assistant professor. 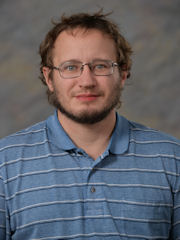