Scientific Interests and Work:
Dr. Blume’s research interests fall into the area of cold atom and few-body physics. Specifically, Dr. Blume is interested in developing a bottom-up understanding of quantum mechanical systems in terms of a few key parameters. Cold atom systems provide excellent model systems in this quest. A key goal is to identify “building blocks” that provide an intuitive means to understand larger systems and/or serve as starting points for developing many-body theories. Dr. Blume’s research utilizes analytical and numerical techniques, and the development of new or improved algorithms is one the group’s strengths.

Background:
After receiving her undergraduate degree from the Georg-August University in Goettingen, Germany, in 1995, Dr. Blume conducted her Ph.D. research under the joint supervision of Birgit Whaley, Department of Chemistry at UC Berkeley, and Peter Toennies, Max-Planck Institute for Fluid Dynamics (now Max-Planck Institute for Complex Systems), Germany. Dr. Blume’s graduate work focused on the theoretical description of doped liquid helium clusters by Monte Carlo methods. These studies were motivated and guided by experimental studies conducted at the Max-Planck Institute.

After receiving her Ph.D. in Physics in 1998, Dr. Blume did postdoctoral work with Chris Greene at JILA, Boulder.  While at JILA, Dr. Blume continued to develop novel theoretical and computational approaches to treating van der Waals clusters and additionally started to investigate cold atom systems from the few-body perspective.

In August 2001, Dr. Blume moved to WSU as an assistant professor. Dr. Blume was granted early tenure in 2006 and promoted to full professor in 2012. Dr. Blume was elected APS fellow in 2010. She is serving/has served on the Editorial Boards of Physical Review A and Journal of Physics B, and was Chair of the Topical Few-Body Group of the APS in 2013/2014. Dr. Blume has served on several APS committees, and continues to be actively involved in the organization of workshops and conferences. 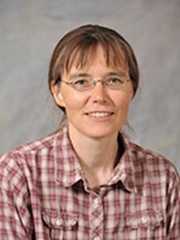