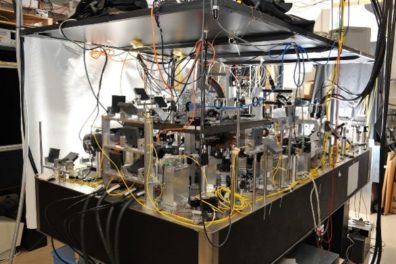 When a cloud of atoms is cooled down to temperatures near absolute zero, the atoms’ behavior starts to display a fascinating dual nature where some aspects remain particle-like, while other aspects of their dynamics become wave-like. This dual nature, as described by the theory of quantum mechanics, is a cornerstone of modern physics and key to the development of current and future quantum technologies, including novel sensors, novel ways of secure communication, and novel computation paradigms. At sufficiently low temperatures and sufficiently high densities, the atoms can form a Bose-Einstein condensate in which a million of atoms form one macroscopic matterwave. These condensates, as generated on a routine basis in the Engels lab, provide a revolutionary and highly versatile access to modern physics.

Experiments with ultracold atoms are a very fruitful environment for the training of students. The experiments allow the students to gain experience with a very broad range of techniques, including modern electronics, optics, ultra-high vacuum technology, automation programming, CAD design, modern imaging analysis software, numerical simulation algorithms, etc. Due to the complexity and versatility of atomic physics experiments, projects can easily be tailored to a student’s interest and skill set. Students at all levels of experience, ranging from REU students to graduate students, have participated in projects in this lab in the past. Concrete examples for past projects conducted by students at the undergraduate level include, for example, the programming of camera software and imaging analysis, the design of external cavity diode lasers, or the setup of an optical spectrometer. In the frame of this REU program, REU students will have the opportunity to construct modern optics setups that are of high relevance for state-of-the art atomic physics experiments, including advanced laser spectroscopy setups, EIT experiments, Digital Micromirror Device setups, etc.

The Engels lab has a long history working with students at all levels, including REU students, undergraduate and graduate students. Undergraduate students who have been trained in this lab have gone on to very successful careers. To give just two examples, a former undergraduate student, who was involved in designing diode lasers in the Engels lab, worked at Stanford afterwards and is now building up a career working at high tech startup companies in the Bay area with the goal of commercializing quantum technologies. Another former undergraduate student in the Engels lab received a prestigious national Barry M. Goldwater scholarship as well as a RISE (Research Internship in Science and Engineering) scholarship awarded by the German academic exchange service (DAAD), and a Fulbright Scholarship. After spending a year abroad at the University of Heidelberg, Germany, he is now a PhD student at the University of Colorado performing research at NIST Boulder in the field of atomic physics.