During Late August, 2003, Mars swept closer to Earth than usual. This makes it bright (brighter than any star) and large in angular size so that telescopes can see more surface features than usual. At Michael Allen’s suggestion, we committed to opening Jewett Observatory every night Monday through Saturday, bracketing the close approach of Aug 27. This also corresponded to the first week of classes at WSU.

Pre-event hype: Various news outlets latched on to an astonishing fact, that Mars has not been this close in 59,540 years according to numerical orbit computations, and thus brought wide exposure and a high level of popular excitement to the close approach. As usual, we distributed letter-sized posters to all campus buildings advertising the event. These usually bring between 10 and 50 people to an open night. In addition, the College of Sciences prepared a press release, and shortly after Michael and I firmed up the observatory schedule reporters began to call.

The Spokesman-Review article, 8-23-03, front page, gave an early start. A misprint in this article, that our first open night would be Sunday the 24th, caused several to show up to a deserted observatory that night. Monday night was clear, and about 300 people showed up with lines about halfway down the hill. I was very, very impressed by this large turnout and sent a “help” message to the local amateur astronomy club (Palouse Astronomical Society) for them to show up with their portables. Tuesday was so cloudy that Mars was invisible at first, although some people got a good view later on. About 75 people came by. For Wednesday, I checked out a small TV/VCR for the infotainment of people if the line reached Monday’s length.

On Wednesday,the student paper, the Daily Evergreen article 8-27-03 splashed an HST picture of Mars on the front page, along with Observatory information. On Wednesday night, we hear, the TV meteorologists (especially Chris Crocker of channels 4 and 9) were urging people to head outside to view Mars, as this was “the day” of close approach. The mighty power of mass media focused on the observatory that evening. We opened on time, and it looked busy, so I hummed around inside the dome, chatting with the people that were there, unaware of what was happening outside. Finally, Michael Allen told me that I had better go look. Parking had become impossible. A line of people had formed all way down the hill (about 200 feet) out into the parking lot (another 100 feet) and then down to the start of Observatory Drive (500 feet). The campus police were aware of the situation, and had blocked off observatory drive altogether to direct traffic to more distant parking areas. ( See WSU Traffic Alert 8-28-03.)

It is impossible to be accurate, but at least 1000 people were standing in line. I suspect another 1000 tried to come but either saw the line and left, or stayed briefly before leaving. We estimate that about 800 people got to look through the eyepiece of the 12-inch. We closed about 3 a.m. 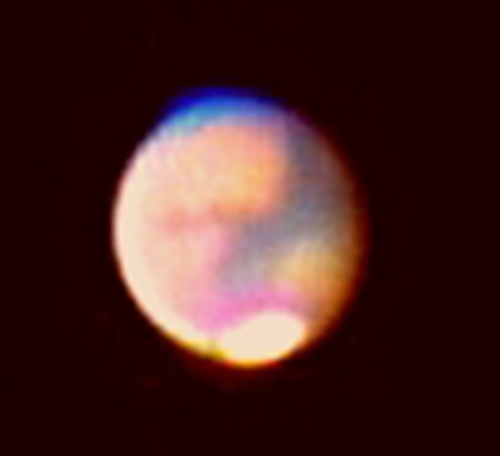